I) Ubiquitin-mediated control of Toxoplasma gondii

During bacterial clearance an initial cellular recognition event marks bacteria or the bacterial inclusion with ubiquitin. This ubiquitination event can either lead to the degradation of the cargo or to signaling events inside the host cell. Whether ubiquitin-driven host defence played a role in Toxoplasma control had been unclear.

We find that in mouse embyonic fibroblasts the PV of type II and not type I Toxoplasma is ubiquitinated in an IFNγ-dependent fashion. Most of the ubiquitin is of the K63 and K48 linkage. 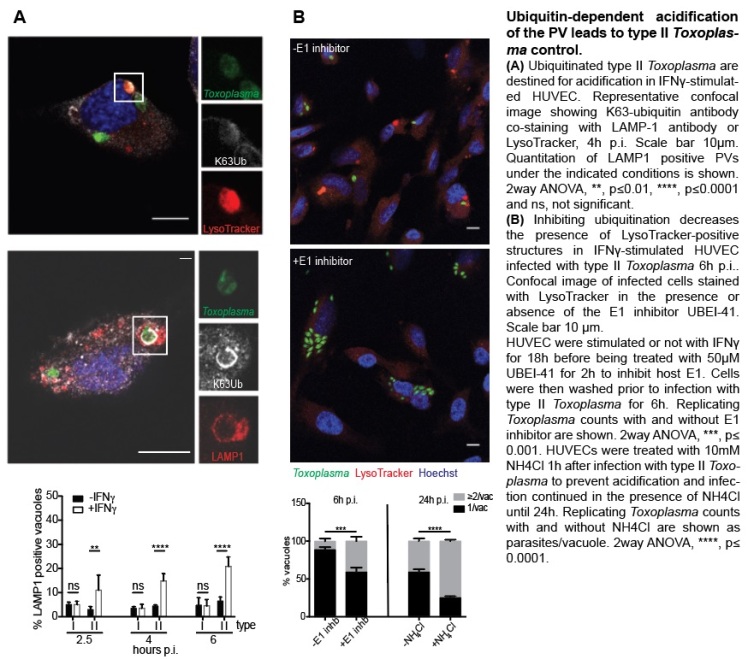 The ubiquitin linkage found around the PV is predominantely of the K63 type and the recruited ubiquitin-binding protein p62 is able to contribute to the restriction of the parasite. 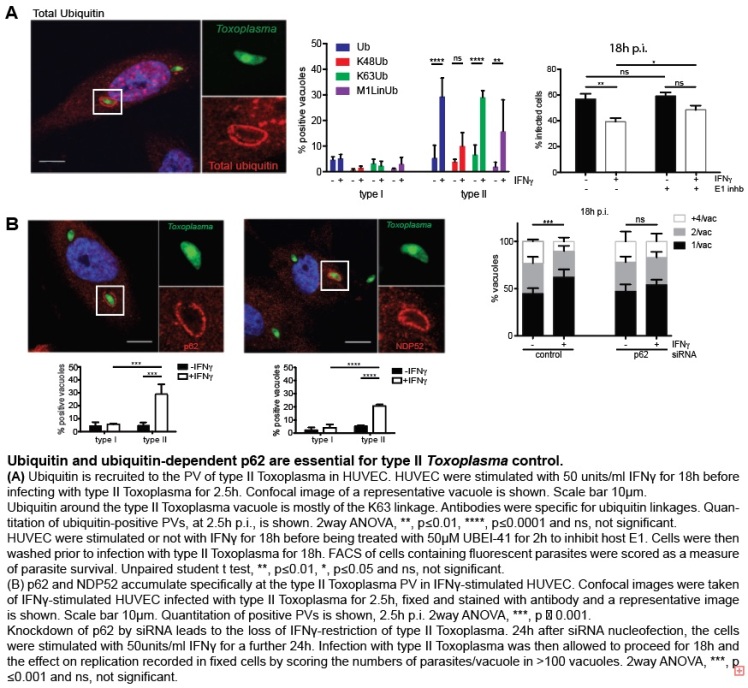 Future questions for the ubiquitin-mediated control of Toxoplasma in human cells:

How is the acidic PV (APV) generated? What Toxoplasma factors mediate the evasion of type I parasites from this pathway? What E3 ligases deposit the ubiquitin? What are the roles of p62 and NDP52 in Toxoplasma restriction?

Among the proteins highly upregulated as a consequence of interferon-stimulated transcription are the p65 GTPases (GBPs), members of the family of large GTPases that mediate resistance to intracellular pathogens. Contrary to the p47 class of GTPases, the GBPs are present in multiple copies in both the mouse and human genome.

The structure of human GBP1 has been solved and the ability of some family members to hydrolyse GTP to GDP and then to GMP is established. The antimicrobial profile of the human p65 GBPs was restricted to viruses and bacteria and few interaction partners are known.

Human GBP1 in A549 epithelial cells restricts the replication of type II and not type I Toxoplasma and has no impact on Chlamydia and Salmonella.

How does GBP1 restrict type II Toxoplasma in human cells? What Toxoplasma factors mediate the evasion of type I parasites from GBP1-driven control?

Through their production of IFNγ, CD8 T cells are important in conferring resistance against Toxoplasma. After an infection with Toxoplasma, both CD4 and CD8 T cells infiltrate the brain. Usually transgenic parasites expressing model antigens in combination with transgenic T cells have been used as models for infection. Obvious shortcomings of this approach include difficulties in controlling expression levels and localisation of the antigen, and moreover the model transgenic T cell receptors might not recognise the model antigen with physiological affinity.

Interestingly, we have three lines of mice with unique TCR sequences that ROP7 epitope-bound MHC class I albeit with different binding affinity. This enables further studies on how the binding affinity of the TCR to MHC controls CD8 T cell phenotypes and function. We are characterising and comparing natural Toxoplasma antigen-specific CD8 T cells in the chronic phase of Toxoplasma infection in the brain depending on the interaction of different TCRs with the same epitope-major histocompatibility complex.

In the future we are discontinuing this line of research.